Nexters is an international game development company which strives to introduce the joy of core gaming experiences to casual players.

Thanks to our hit games like Hero Wars, Throne Rush, and others we’ve reached over 200 million installs worldwide, built a team of 650+ inspired game developers, and become one of the top five independent mobile game companies in Europe.

In August of 2021, we went public on Nasdaq Stock Market under the ticker symbol "GDEV" and have tremendous plans for the future. We welcome new talent to join in our mutual growth and help establish us as the new leader in the industry.

Learn more in our Fact Sheet
Our Story

The Nexters story dates back to 2010 when the future friends and founders of Nexters first met. 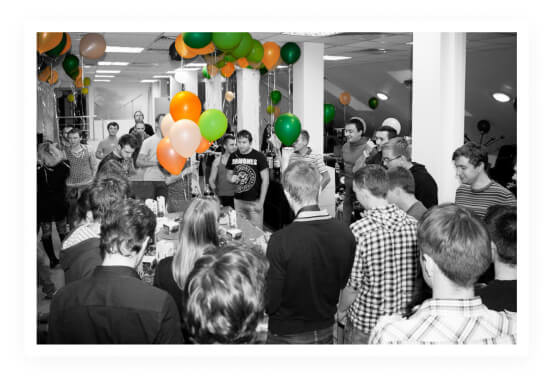 In those days, Andrey Fadeev was running Progrestar, a social games development studio, and Boris Gertsovskiy was shaping his plan to start a game business.

Later Boris Gertsovskiy became the President of a game studio Crazy Bit, and two companies began their partnership, which resulted in the birth of Nexters in 2014. In the following years the company grew quickly and released its blockbuster - Hero Wars.

But the real boom started in 2018, with the strategic decision to scale on mobile. Since then, Nexters has vastly increased its players, revenue, and team, which today consists of over 650 game developers.

At Nexters we are always focused on “What’s next?” That’s why this year we’re going public and setting the ambitious goal of transforming the gaming industry.

Learn more of Our Story
Life at Nexters
We cherish and develop an open and friendly culture.

At Nexters, we follow a horizontal management approach and multi-way workplace communication style, which helps us to appreciate each employee’s efforts and make everyone's voice heard. We have regular meetings with the founders and management team – not to mention mind-blowing parties and team-building events.

Some of the numerous benefits our team members enjoy at Nexters:

Careers
As a steadily growing international company, we welcome you to join us from wherever you prefer: at our headquarters in Cyprus, in Armenia and Kazakhstan, or remotely from anywhere in the world.

We offer vast opportunities for talented team members to reach their full potential and grow together with us. Please check our open positions and don’t miss your next adventure.